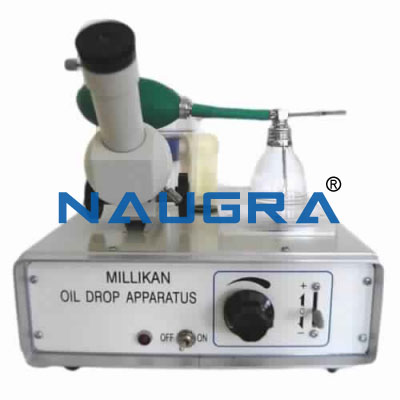 Millikan Oil Drop Experiment for Physics Lab for High School Science Kits Lab.
Millikan Oil Drop Experiment for Physics Lab - This experiment aims at measuring the charge of an electron and is perhaps the most basic of all atomic physics or modern physics laboratory experiments. It won Millikan the Nobal Prize in the year 1923. The experiment depends on the ability to control, measure and balance very small force of the order 10-14N. The set-up consists of two horizontal parallel plates separated by about 5mm. The upper plate has a small hole through which microscopic oil droplets are sprayed in between the two plates with the help of an atomizer which is like a common perfume sprayer. These droplets get charged due to the frictional force during spraying. The free fall of these droplets in the space between the plates is observed in the gravitational field. A measurement of the velocity of fall along with the use of Stokes law leads to the calculation of the mass of the droplets and their radii if the oil density is known. These are of the order of 10-15kg and 10-6m respectively. By applying a potential difference between the plates, a uniform electric field is produced in the space between the plates. A measurement of the velocity of the negatively charged droplets rising in the electric field allows a calculation of the electric force on the droplets and hence the charge carried by them. In the experiment the droplets which rise and fall slowly are selected as they are expected to have a fairly small charge. These droplets are made to rise and fall several times. The repetitions of measurement of the velocities of rise and fall reduce the random error of their means. A fairly large number of droplets are observed and their charges are calculated. The analysis of the data on the total charge carried by the droplets shows that these total charges are integral multiples of a certain smallest charge which is the charge of an electron. This result also shows that the charge is quantized. The measurement of the charge on the electron can lead to the calculation of Avogadro’s number. The charge F (the Faraday) required to electro-deposit one gram equivalent of an element on an electrode during electrolysis is equal to the charge of the electron multiplied by the number of molecules in a mole. The Faraday has been found to be F = 9.625 107 coulombs per kilogram equivalent weight. Hence Avogadro’s number N = F/e Apparatus The present set-up consists of 1. A oil drop chamber mounted on top of the panel. It has (i) A pair of horizontal parallel plate electrodes separated by about 5 mm thick ebonite ring with a hole for viewing the oil droplets. (ii) The upper plate has a small hole in its centre for the admission of the droplets which are produces by spraying oil with an atomizer. (iii) A device to illuminate the space between the plate electrodes. 2. Three leveling screws at the base of the panel to make the parallel plate electrodes perfectly horizontal (perpendicular to the gravitational field) and a water-level placed on top of the panel to check it. 3. A microscope with CCD camera head to view and transmit image of oil droplets between the plate electrodes to the monitor. 4. A power pack to supply continuously variable voltage in the range 0 – 800 V to the upper plate electrode when the electric field is to be created between the plates. The lower plate is permanently grounded. 5. A digital voltmeter to measure the potential applied to the upper plate. 6. A ‘Time Meter’ to display the time for which the oil droplet is allowed to move. 7. A timing device to measure time interval between the passage of droplets through preset points. There are two keys to operate this device. Pressing the ‘Clear’ key, wipes out the time information. This is like a reset key. The time meter now reads ‘00.0’ sec. Pressing the ‘Start/Stop’ key starts the timing device. Pressing it again stops the device. The elapsed time can be read on the meter. 8. A monitor with graduated screen. The horizontal lines on the monitor screen help in setting the distance through which the droplets move. 9. An atomizer to spray droplets. 10. A thermometer to measure the room temperature. Method Time for free-fall of the droplets under gravity between the preset points is measured to obtain the velocity for free-fall. For observing the effect of the electric field on the charge carried by the droplets, there are two alternatives. In the Dynamic method, the velocity for the vertical upword motion is measured for a fixed potential difference. In the Balancing method, the potential difference between the plates is adjusted to balance the droplets. The result of this set-up are within 5% of the standard value.